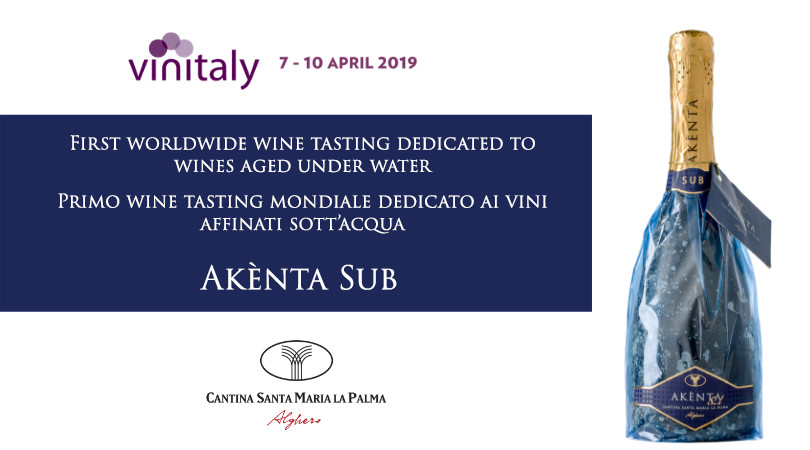 Sardinia’s wine industry steals the limelight at a highly original tasting session. Akènta Sub from the Santa Maria La Palma Winery was centre stage at an event being staged for the first time anywhere in the world.

Sardinia and especially Alghero captivate visitors to Vinitaly with the tasting of Akènta Sub from the Santa Maria La Palma Winery, the first sub-aqua wine made on the island. During the prestigious wine-industry expo, AIS Italia (the Italian Sommeliers’ Association) organised a special event entitled “Ageing under the sea: survey of an emerging style”, given over exclusively to those wines produced with underwater ageing – a technique that is arousing the interest of increasing numbers of people and is winning over more wine lovers with every passing year.

At the event, 5 special wines from Italy and France were tasted, all sharing the common feature of having been at least partially aged under water, at different depths and using different methods. Sardinia, too, was part of this special tasting session thanks to Akènta Sub, the wine produced by the Santa Maria La Palma Winery and aged deep-down under the water within the Capo Caccia-Isola Piana Marine Protected Area, as part of a local enhancement project that also encompasses the Porto Conte Nature Reserve, Diving Blu Service and Alghero’s Associazione Diving.

Akènta Sub was introduced by the winery’s president Mario Peretto and oenologist Gaetano La Spina, who underlined the importance of the project as part of a “territory-wide system” geared towards making the most of the entire Alghero area and, indeed, of Sardinia as a whole, flagging up the constant experimentation that lies at the heart of this method.

The spumante was then tasted and described by the sommelier Valentino Tesi, ranked second in the national contest for the Best Italian Sommelier. In front of a packed audience, he encapsulated the elegance of this wine, produced from Vermentino di Sardegna DOC grapes using the Charmat method, highlighting in particular its bright colour, its fine-grained, persistent perlage, its fresh fragrances and its floral tones. This is a product that, thanks to its underwater ageing, evolves and differentiates itself from the classic version, becoming what Signor Tesi defined at the end of the tasting as “a delightful-to-drink wine, truly a wine of exceptional quality”. The event was attended by more than 100 people, who chose to buy special tickets for what was an utterly unique occasion.

Wines aged under water constitute bona fide “treasures” that are ready to emerge from the depths, bringing to the surface a great story and a wealth of one-off flavours. It all adds up to something new for the wine world, a real emerging style, and Sardinia, and specifically Alghero, are part of this great innovation, which constituted one of the most important and original aspects of the expo.

Now the winery is hard at work in preparation for the upcoming Akènta Day 2019, which is set to be spectacular.